Dave, the guy that bought my Dump Truck, and I got out there about 1000 to load it up for him to take. You should have seen it! Lot’s of huffing and puffing and Digger action to push the thing “nose first” up onto his trailer.  Chaining it down and using Sledge Hammer, Marlin Spike and a huge honking pipe wrench to remove the loading ramps; only to find the tongue was light. WAY too light. 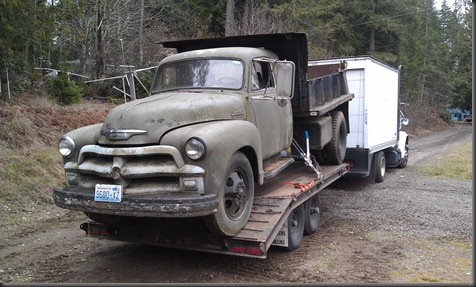 So, we lowered the Dump Truck off the trailer, put the loading ramps back on (sort of), used the Digger to turn the thing around, and pushed it back up onto the trailer. Second time went a lot easier (and faster) than the first time! Still was a lot of work though. (See the previous post also.) It just barely fit!

Not much else going on. Made a trip to Olalla to see a friend; knew I wasn’t going to feel like cooking so I picked up a couple of chicken strips and had those and salad for dinner. SWMBO still isn’t feeling well and didn’t feel like eating much.

Now I’m just waiting for the Wednesday net to start.