All the usual chores plus trying to finish up the MILA (only have swabbing to go). Then got into painting the MILA cabinet doors. Did manage to lay out for about half an hour. Oh, weeded & watered the garden and tried to point the peas to the thing they’re supposed to climb. And I mowed the garden area. I hate that the grass has grown higher than any of the veggies I’ve planted!

Just waiting to go pick SWMBO up and I think I’ll be through for the evening. Maybe I’ll let Doctor Who run all weekend… 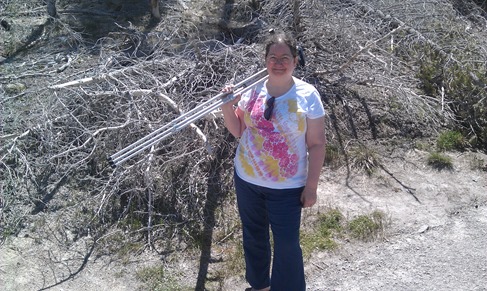 Got up and got an early start  to Yellowstone. Highway was just as pretty as it was the day before.

Had to pay to get in this time. Then got caught in a “traffic jam” that was about a mile in front of us and probably grew to be all the way back to the West Entrance before we got to the head of the line of cars and saw what was slowing everyone down. After about an hour in line we found out it was 2 Buffalo playing in the road. Only a car or two could get past them at a time before they’d go back in the center of the road. But at least it wasn’t something stupid! (Then I’d have gotten pissed! I know me.) 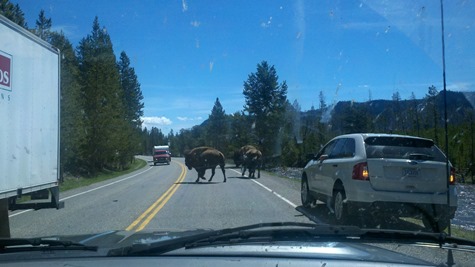 I let SWMBO pick our destinations so she could have some fun too. So we spent a good part of the day in the Norris area; looking at all the geysers and the “Artist’s Pots” (where the mud bubbles) and places like that. I had a ball! 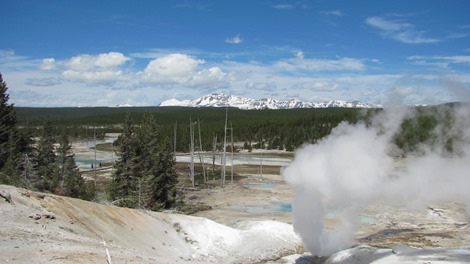 Spent so much time looking at these things that about 1430 I was ready to call it quits. The crowds were horrendous! We were going to go to see Old Faithful but neither of us really wanted to deal with the crowds anymore. I’m telling you: It Was Packed! We decided to save Old Faithful for another trip. (Get There EARLY!!)

So we drove back into West Yellowstone and did some shopping. SWMBO got a couple of T-Shirts (Cougars and something else) and I got a Trilobite. Then we stopped in a cute little café and had a snack. She had a root beer float and I had a chocolate malt. It was good. 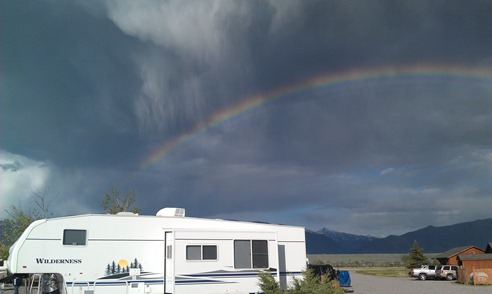 After a couple of hours of window shopping we took off and went back to the camp ground in Ennis. We were both tired. Shower felt good then it was time to just relax. Saw a double rainbow! That was cool! Had a pretty good “midnight” snack and then it was sleepy time.

SWMBO got a pretty bad sunburn on her arms and neck.