My back, that is. That fall I took awhile back finally resolved itself into point tenderness in the L3-L4 area and SWMBO said I had to go get it checked out. So I went to Urgent Care yesterday. X-Ray shows nothing. Well, except an old T-12 compression fracture.

What? Compression fracture? When did that happen? I have absolutely no idea when I hurt my back, way back when, that badly. Other than pulled muscles I haven’t had any blunt force trauma that I remember. Nor landed on my back in an incorrect manner.

It was sort of like when I was getting an EKG a few years ago and the Doc came in and asked “When did you have your heart attack?” Excuse me; What? I had a heart attack?

So, Doc recommends against me getting on the tractor (my new tractor) for a few days. No heavy lifting even though I lift and carry this bodacious belly wherever I go. Just take it easy for a few. She refilled my Ibuprofen and added some muscle relaxants to take before bedtime. Yay! Drugs!

So SWMBO and I went on date day and after dinner spent way too much at WinCo (and still didn’t remember to get everything we went for) and way too much at the Chef’s Store. But the 25 lb chunk of future burger (Chuck) was “on sale” and we need to make more burger anyway. I got a butt-ton of veggies to run through the freeze dryer cause you can never have too many veggies. (I also call them “meat extenders.”) More chicken in the works. SWMBO wants to buy and freeze dry peaches this year.

Yep, trying to get as self-sufficient as possible for when the Democraps tax us out of house and home. I’m SO ready to replace each and every Republican for the lazy do-nothing shits they’ve all become. We need to adopt the same tactics as the Liberal machine and start taking our Country back. At one time it was perfectly acceptable to get violent for freedom. Let’s fight violence with violence for awhile and see how “they” like it.

Oh, ordered my Betsy Ross Flag and my “Don’t Tread On Me” Flag to fly from my radio tower. Don’t care if I get put on the FBI terrorist list. Fuck the FBI. Fuck Joe Biden. Fuck Liberals & Democrats. 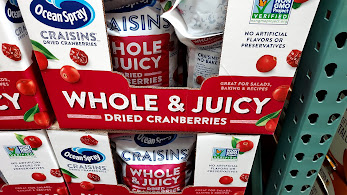 Something just doesn’t seem right about this. How can DRIED cranberries be “Whole & JUICY?” But don’t get me started.

Couple of hours after going to be last night I had to pee (because: Old Guy) but climbing out of bed hurt my back so much I was tempted to just crawl to the pisser and back. Even contemplated (that means “thought about”) having SWMBO take me to the ER cause I just plain hurt! But I went back to bed instead.

At 0600 when I woke up I sat right up, climbed out of bed, and had no more than a twinge in my back. Been that way most of the day. Go figure.

Date Day! Took SWMBO to the teriyaki place in Gig Harbor for lunch/dinner. Stopped by Walmart for a new Roku (since the one built into the big tv doesn’t want to work anymore). Then stopped by St. Vinnies where she bought 15 old cd’s for $3. (Which I now get to rip for her. I don’t mind. Most of the time I enjoy doing things for her.)

And that was Date Day. Simple dedicated time to spend with each other. Going on 37 years now.

Before we headed out I took my new tractor out back and started working on the path/trail. I think this thing is going to work out fine. As long as I don’t cut too deep I can move a lot of dirt. Nice. Need some plastic drainage pipe …

Freeze dried some pulled pork riblet things. Made them up as pulled pork sandwiches by slow cooking them in Dr. Pepper. Ran it an extra cycle but it all still feels slightly oily; so I think it’ll only be good for a year or two on the shelf even with Oxygen absorbers. I don’t add the BBQ sauce until it’s time to re-hydrate so all that flavor is sucked into the meat.

Tomorrow is “meat” day and I’ll be cutting up and cooking 8 large chicken breasts, a whole chicken rendered and pulled apart, and will BBQ (well, Grill) the rest of those riblet thingies and get everything on trays and into the freezer. More taters to do before they go TU. Oh, I did a couple of slices of German Chocolate Cake that didn’t turn out too bad. Won’t be “re-hydrating” them though.

Got SWMBO’s new Roku up and running for her. She’s been Jonesing for This Old House.

Which was a real headline, BTW. Nice to know I can still air out my junk as long as I wear a mask. Even 10 years ago it would have been illegal AND (probably) a sex crime to be naked in public in a mask.

But y’all ain’t seen nothing yet! Wait until the “Monkeypox” measures are slammed in place. COVID will seem like a cold or something. Wait …

I did hear a police call the other day where the Officer on-scene reported “She’s completely naked now and still talking to someone who isn’t there. I can’t get any response from her.” Some people get all the good calls.

How times have changed! I “grew up” with 720k floppies. Then 1.2mb. Backing things up was a real pain. Used a program (called “Fill” appropriately) that took a directory of things to be copied to floppy and filled each to capacity if possible. Had hundreds of the things in sorted boxes.

Hell, my first “IBM Compatible” was a twin floppy Hyundai XT. (640k ram. CGA monitor. Four colors whether you needed them or not!) Started out with a Vic-20 then C-64 and the external floppy drives for those were nightmares. But one upgraded from the tape drive as soon as one could!

So, where have times changed, you ask? I just looked at a directory of video files (CSI Season 5) that came out to an astounding 41.6 GIG and thought “That’s not so bad.” (Haven’t been run through Handbrake yet which will bring it down to about 15 gig or so.) 41.6 Gig &”Not so bad.” Wow.

Went out yesterday and bought a Tractor. It’ll be delivered Thursday. Basic with a bucket and backhoe and a 3-point hitch connector thing. A bit bigger than I wanted/needed but anything smaller really had no attachments or any real power to get those (slightly) bigger jobs done. Diesel. Of course, my neighbor up-hill will get on about “You shoulda got this and you shoulda got that.” Which would work great for his 60+ acres. But I have only 3.2 acres and don’t need a BIG tractor. I need something that’ll mostly keep a 70 year old guy from having to pick up a shovel to move some dirt or drag a downed tree out for chopping up. Semi-annual driveway care. You know: Stuff!

So, got it today instead of tomorrow. Cool. Now, what’s the first job I’m going to do with it?