I just can’t win when it comes to Renters. The other night I went to bed and after awhile I heard them start to argue. Then I hear someone slam someone else around while yelling “Fuck You” and knew it was time to get my robe on and go downstairs. Did. She answered the door with fingerprints of blood all over her face. He had a slightly bleeding head wound. (Wasn’t too serious or it would have been bleeding a LOT more. Head wounds do.) He was on the phone witth 911 and acting a lot more dazed than his apparant wound account for. But that’s just my opinion.) Anyway … 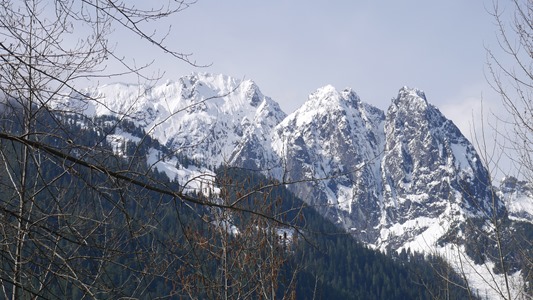 So, Sheriffs came (Does their mama’s know they’re out playing policeman?) and wound up arresting him. Read online later he’s charged with Assault/Other and Kidnapping/Abduction. He made bail and the Judge is letting him take his already planned trip to Florida. (It’s like the Judge wants him to run or something…)

I filled out an eviction form for him and need to get off my duff and change the locks to the MIL apartment. SHE wants to stay and says she can pay the rent. We’ll give it a try cause finding new Renters will be a real pain. Hope this works out.

HE is out basically cause I don’t like bullies. Not a fan of drama either. 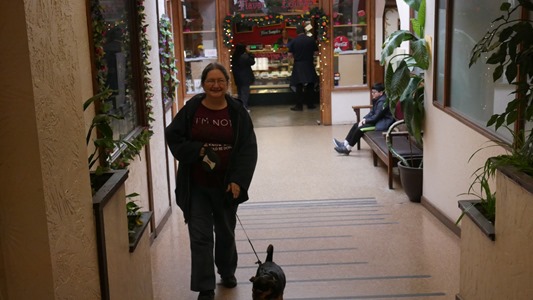 And, yesterday, SWMBO and I took a day trip to Leavenworth, Wa just to get out of the house and see some more-open sky. Once we got off I-405 it was a pretty ride. Snoqualmie Pass was pretty and there was lots of free range snow. Leavenworth itself was kind of cool and we spent our share of Tourist Dollars before leaving around 1600. I “let” SWMBO play her music for the whole trip. (Which alone should prove I love her!) She got me a really nice walking stick. Which may have helped if she had gotten it before I took a full frontal face plant in the dirt. Klutzy Shit! But that wasn’t her fault!

When we got home we unloaded the truck and left the dog and did our weekly shopping at Safeway. Saved a lot of time and money over Walmart cause Safeway doesn’t have a blu-ray bin. 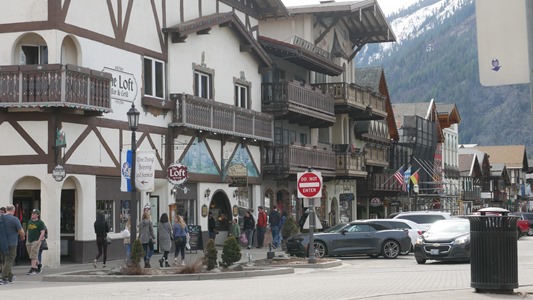 So, today, Easter Sunday, we’re mostly just relaxing. SWMBO is off quilting and listening to Conference. I’m getting my usual Sunday chores done and taking the Dog for mini-walks.

Made sloppy joes and fries for dinner. Lazy, I know. Also made a couple of small meatloaf’s for dinner tomorrow with the “leftover” burger. Think me and the Dog will head outside for a few.

Think I’ll publish now. Want to do a bit of X-Plane before bedtime.

Well, Safe anyway. Woke up a bit late this morning and started getting ready to come on home. Man, we can make a mess! But, got every-thing done, packed away, and even got the sewage drained. Took off from Hoquiam about 0930.

Got home before Noon. Unpacked. Dishes started. Laundry started. So SWMBO wisked me off to Costco. Spent way too much on things we need. Usual stop at Safeway and, we’re back.

Will probably go to bed after the Belfair Monday 2-meter Net. Tired. I only drove 200+ miles today

Oh, coming home, when we turned up Sandhill, A big bald eagle took off from the side of the road and flew across the road in front of us. I might have captured it on my dashcam. Cool!

And I was too pissed at the crappy Internet connection to notice: The Headline Was: Cold. Rainy. Went To The Beach and I’m gonna post it now. Last Sunday:
After our morning absolutions (and me making a run to Walmart on the other side of Aberdeen to get some tools to fix a leak) we headed out.

Took 101 North to some podunk road that headed towards Pacific Beach. Rained all the way.  Drove out onto the actual beach and parked for a bit. Got out and walked the Dog around. He tried to eat every shell he sniffed out. Dipshit. But, holy shit, it was cold and windy and somewhat rainy and after about 10 minutes I’d had enough. Back in the truck for me!

Followed the road back to Aberdeen (another stop at Walmart) and back to the campground. Tried fixing that damned leak (back of the toilet. Fresh water leak) but tightening everything up and putting one of those hose clamps on (which you CANNOT tighten up enough!) hasn’t worked. So, we’ll just have to continue being frugal with water and making sure we check how full the catch bowl is.

Raining like crazy off and on. Sucks. Nice to be out with SWMBO though. So nice that I made Thrive-Spaghetti for dinner. (It was okay. Wouldn’t want a steady diet of it and next time I’ll be adding more spices and stuff to it.)
Anywho, that’s really about all there is. We’ll be heading home tomorrow.