Like, I’m sitting here, minding my own business, when I suddenly wonder what ever happened to Tip & Doris (Tipton?)? The couple that had wife-swapping “parties” with my folks way back in the day. Harsh part of all that was that they stuck us kids off in one of the other bedrooms while they did it. (Literally I guess: Did It.) Which, I suppose, really was better than us sitting and watching. I still remember walking in on each of them a couple of times. Of course, at 8 years old I had only a vague idea of what was going on. Thanks goodness.

I know. Not posting much. Honestly, by the time I even remember that I need to post it’s past my bedtime. Or I shrug my shoulders and start another episode of NCIS New Orleans and then go to bed when it’s finished. 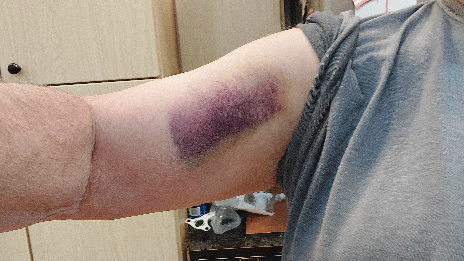 SWMBO’s friend and his family came over for a couple of days last week. The above picture is from setting off both triggers with the shotgun loaded with “double-ought” (?) buckshot. Figured I could handle it because I had shot buckshot before: Not remembering it was from a 20-guage shotgun instead of this behemoth SWMBO’s friend has. Slapped my arm pretty good.

Otherwise, one of my last shots from the 1911 .45 he has completely cut down the tree we had our target nailed to. 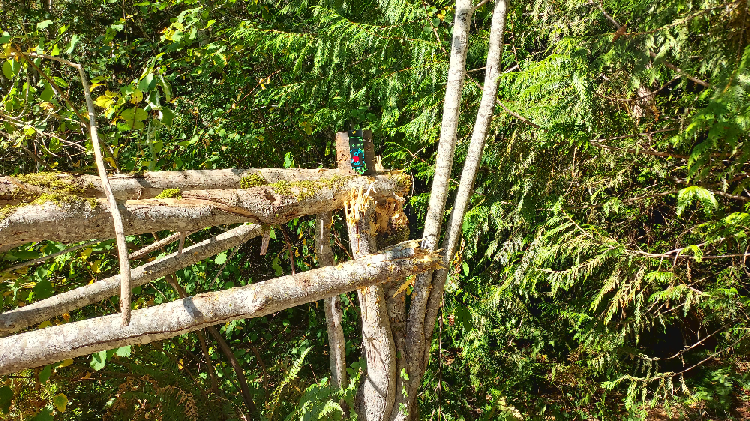 So that was fun. Good thing we’re not lacking in trees around here.
Otherwise, not a whole lot going on. Trying to get outside things done before “The Dark” sets in. Already sucks that it’s still dark at 0600 and that’s just going to get worse for awhile. Hate Winter. 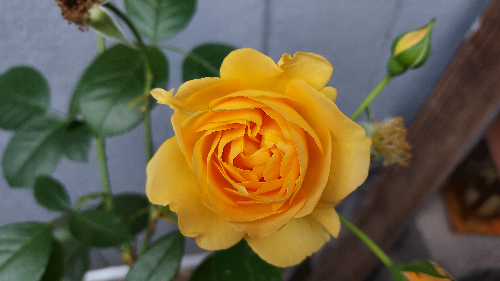 SWMBO’s roses came in real nice. Freakin’ bush went crazy this year! So I planted 5 more for her. Bushes.
Took SWMBO to “Montezuma’s”(?) in the Kitsap Mall for date-day dinner yesterday. It got more spendy. The blond waitress (can we still call them that?) in the split-mini skirt looked especially wow (even better when sweeping under the table across from me (Not that I noticed!)), BUT, the food sucked. We’ll probably pass on them the next time we feel like “authentic” Mexican food. (I think we like El Sombrero’s best anyway. Don’t know why we try other places sometimes.)
Amazon wants me to buy an “echo dot” for only $.99. I’m already paranoid that my phone and my freakin’ TV are listening to me and they want me to buy another device that purposefully listens in. Like that’s going to happen.
I used to take my dick out and wave it to the NSA or whoever it is watching us from our TV, but the other folks in the TV Room at the home got upset.

I need 1 or 2 for projects but won’t be buying them until the price goes back down to somewhere near normal. Dipshidiots.

Trying to make things “better” I broke the Raspberry Pi in the TV room. Well, not physically broke it; just hosed the Pi-Hole installation so  badly that I went ahead and re-flashed the card and reinstalled Pi-Hole and the CUPS (Print) server. Also  installed PiVPN to play with too. The first two are working great. Still learning PiVPN. Well, still learning Pi-hole too.

Trying to re-build/fix our Network too. Surprising the number of “things” attached to our network. Not that 7 security cams and their controller help with that much. (But at least I can be sitting in Bumfuck, Egypt and see who’s at my front door. Or basement door. Or stealing peas from my garden.)

And this is why I’m seriously considering Starlink. (Left part is the Modem. Right from speedtest.net. Ain’t DSL wonderful! But it IS compared to the dial-up we used to have out there.)

I see where Killary Klinton says no one is above the law. Except her, of course. Anyone else think she’s got that painting of Bill in the blue dress that was hanging on Epstein’s wall stashed in their bedroom?

Saw a video of some 3rd world country (NOT the USA) (Argentina?) where the government hasn’t been able to do anything about the motorcycle robbers so the people have started to run them over or otherwise fook them up. Sounds good to me. Maybe we ought to consider it here? Give folks 10% off their car insurance for every 2 protestors blocking a freeway that they take out.

I’m normally not a violent man; but I see violent times ahead. Especially when President Trump wins again.

Was supposed to get some blood drawn last Friday;  but I forgot about it in my Date Day With SWMBO excitement. AND we went to Home Depot so I definitely wasn’t thinking of blood work. 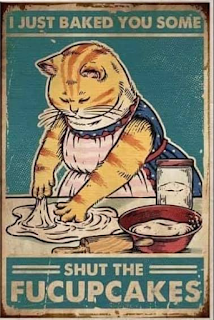 So, 3 day weekend and I don’t eat past midnight last night, but don’t sleep very well anxious that I’d mess up somehow getting to the Urgent Care to get my blood drawn today. But, got there fine @ 0750 only to learn that the Lab Tech didn’t show up for work today. Fuck. Now I get to do this all over again for tomorrow.

My cardiologist called last week because we haven’t seen each other this year and he’s running low on funds or college tuition for his kids or he missed a boat payment and thinks that I should come in for a “checkup.” Okay. Sure. Let’s do that towards the end of the month and he can also finally tell me the results of the last stress test. (Or was not telling me really part of the stress test?) As long as Medicare and Tricare For Life covers it I’ll be there.

Stopped by the mail-it place but they were closed.

Left a message on the My Chart thing asking my Doc if I had to see him first or could he just refer me to the Orthopod? He called me about 1000 and said that he could see me at 1500. Cool! Finally got to tell him that I always feel rushed when we see each other and I don’t get to say everything I need to say. So we slowed down a bit. I know he’s busy, but, I’m not getting the care I need when I don’t

get to say what’s wrong. Which really isn’t much, but …

So, x-rays of my knee appears pretty much normal. X-ray of my pelvis shows arthritic changes and that’s why I’m hearing that “thump” up my spine when I walk. Just getting old.

He’s referring me to physical therapy for my back and hip and the Orthopedic Surgeon for my knee. He did offer to inject “stuff” in my knee and back; but I feel that that’s not really finding out why they hurt so it wouldn’t do much good to treat the symptoms. But that’s just me.

Went to the Naval Hospital Pharmacy and got my two brand new pain meds! The Joy! One I have to take with food and can’t “play” on my tractor several hours after taking it. So I got a few things done before hand. The other is a “couple of hours before bed time” pill. Love those. (Not.) These things he gave me are stronger than NSAIDS(?) but not Narcs. I don’t like Narcs. I can take them but they make me feel funny. Not me looking out at the world. Never been into the “mind altering” stuff other than way too much booze when I was way younger. (Quit drinking alcohol in 1974 or so.)

So I’ll take 3 of each then stop taking them. As usual.

Been watching a lot of video’s on YouTube about OLD Los Angeles. So old the narrator says “Los AinGLeez.” Lots of places I remember were still around when I was a kid. It all used to be a pretty decent place Way Back When. School smog days an all. Did see a picture of the City Hall being built and that was cool. I joined the Navy in that building.

We have a Fire Weather Warning for our area of the Northwest. Think I’ll pull the RV closer to the front door just in case we need to throw stuff in it and bug out. My neighbors are idiots and I’ve been surprised they haven’t burned down the neighborhood already these past 15 years. 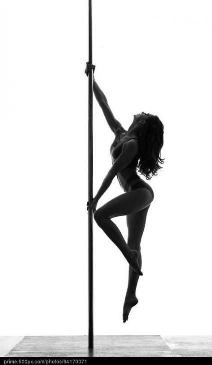 Wow! Lucky me! 8K Smart too! Now if we could only get cable out here. We’d be set. Ad that to the fact that someone in South Africa notified me. Wow! Can’t really be a “smart” television though. Otherwise it wouldn’t show some of the shit that passes for television these days.

Just not a lot going on around here. Wx is beautiful. SWMBO is still cute. I’m still Old.

Left knee hurts enough for me to actually contact (e-mail) my Doc and ask for a referral to an Orthopod. Left leg has been damned near useless the past 3 days.

Got a message on my phone last Friday evening from the cardiologist I saw last year (stress test) saying to give a call back. THAT hasn’t worried me all weekend or anything. I never did find out the results of that test. It was a pretty thorough one too. Hmmm…

SWMBO’s Dad called and asked if we still had his house key from when we visited last May? Turns out: Yep. My cries of “But, He GAVE it to me.” went in one ear and out the other (I saw it) so I have to overnight it to him tomorrow since SWMBO’s brother is going to visit and needs (needs!) a key. Personally, I’d let him (well, insist)(her brother) sleep in the garage. I made enough room for him.

Like I mentioned before: we did the burger thing today. The 9 “extra” burgers are in the freezer getting frozen (hopefully) to be run through the freeze dryer tomorrow. Did some beets for SWMBO the other day and they didn’t turn out too bad (to this beet-hatein’ heathen). I don’t feel bad though cause she still won’t eat any of the tuna I freeze dried. Her loss.

Lined my bathroom shower with reflective stuff we got at Home Depot last Friday (on Date Day) and started some cantaloupe seeds to soaking. Got the grow lights all set up and going. I’m thinking I might try some cucumber too. Maybe. Or Maters.