SWMBO called earlier. Her Doc put her on 50/45. He even gave her a “guesstimate” of 10-14 days and she should be home. Woo Woo! He said she’s turned the corner and should NOT be one of the 2/10000 folks that get this far and die anyway. Well, THAT’S good news!

So I’m not exactly jazzed, but, yeah, Cool!

Tried an experiment with a real de-boned turkey breast I got at Walmart the other day. Spread some avocado oil on it then rubbed it with a paprika-pepper-salt-Italian seasonings mix and stuck it in the Pressure Pot with celery and chicken broth for 30 minutes (actual cook time) and it turned out YUMMY. Cooked the potato’s in with it and made mixed veggies in a separate pot and all of it was good. Surprised me. Not all my experiments turn out this well. Or well at all sometimes. This was juicy and tender. Nice. 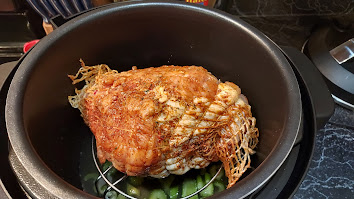 I’ll be doing that again. Took an hour from prep start to sitting down to eat.

Part of this particular experiment is also to get me a not-really-that-processed lunch meat for the next few days to a week. I don’t think it’ll last a week since I really like cold turkey sandwiches. Pile on the Mayo and Turkey and stand back! The best part of Thanksgiving is the days-after sandwiches. 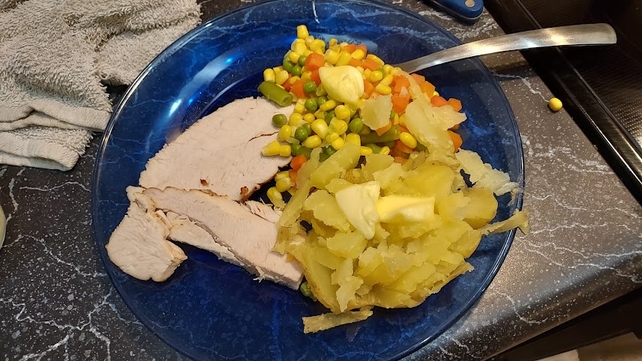 Went to get the veggies out of the freezer and noticed it wasn’t running. Hmm.. Breaker was tripped. Tripped when I turned it back on. Took about 5 minutes to track the problem to the RV. The extension cord/plug had fallen out of the wheel well and into a small puddle. That was shorting out the circuit for the garage receptacles. Unhooked it (after unplugging the extension cord!) and have what I can get in the house drying out. Everything else is working as usual.