Trying to cut down on the amount of caffeine I ingest during the day. Cut out my morning mug of coffee and have had only one Dr. Pepper so far. Yep, got a headache late afternoon. Going to hang tough though… All in the name of trying to get my Blood Pressure to go back down to somewhere approaching “normal.”

But, it quit raining and the Sun came out and the Dog and I got to go for a walk around the property. That was nice. Notice I have a tree that’s about to fall over. Wait. It has fallen over, it just hasn’t hit the ground yet. Other tree’s are holding it up. Gonna have to do something about that the next nice day we have around here.

Not much else going on. Scanned some pictures for SWMBO that I found in a file cabinet drawer I was emptying out the other day. The usual chores. Made a stand to raise my monitors up about 5 inches. Now I have “extra” room under them for other stuff. Also brings the middle of the monitors up to eye level. Still getting used to that. 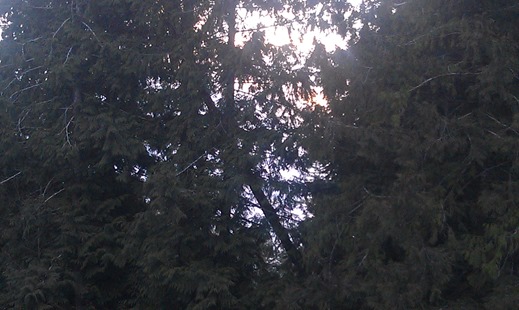 Wow. Sudden big gust of wind out there. Thought a truck was coming up the driveway.

Ok. We home safe. Passed a place about halfway between Gorst & Belfair where a van was off in the ditch. Either dogged a deer or was driving too fast for the rain. Who knows? Who cares? I’m going to read…