Oh, I got my usual shit done. But after all that I mostly “played” with getting my radio to do APRS stuff. Or, I should say, my computer to do APRS stuff. My radio doesn’t do anything with APRS but send the signal my computer tells it to. So, other than having real problems with people being able to follow me around, I won’t be doing APRS in the truck anyway.  GPS is bad enough for that. 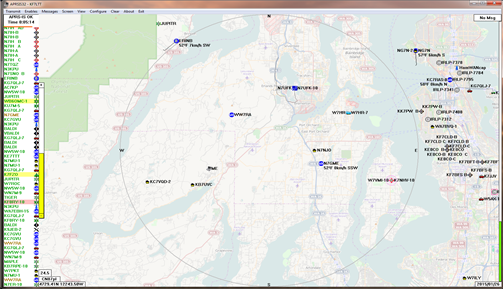 Anywho, playing with APRSIS32 and WinAPRS. Neither of which you need a radio with. APRSIS32 is way easier and I can use it on that Windows 8 tablet I have. Which will be good for that class at the next MCARC meeting when Jerry is going to give a class on it. So, while I’m not really interested in APRS I’m brushing up on it for the class.

Watching Winter Storm Juno on the Weather Channel. All I can say is: Better they than us! A storm like that out here would completely shut things down from here to Idaho to Southern Oregon. Hell, 2 inches pretty much shuts this area down. Wouldn’t mind getting a couple of feet of snow though. I think my Schweetie and I would stay hunkered down in our nice warm bed for most of the time.

And that’s about it. Picked SWMBO up and got her home safe. She’s in the kitchen (pictures! I need pictures!) making her salads for her lunches. I’m about to turn storm coverage off cause, like me, it’s petering out.