The World has gone fuckin’ nuts. And the U.S. has gone nutsier. (If that’s a word.)

Governor Inslee ordered everyone, except “essential” workers, to stay home. Social distancing is still trying to catch on. Stocks have crashed, recovered, crashed, but may be recovering today. Actors keep spewing their socialist anti-American anti-Trump rhetoric.(Like their opinion matters!)

So, SWMBO and I are hunkered down in our place. We didn’t participate in the great hoarding run on toilet paper and sanitary wipes but have enough of both to last awhile. Food isn’t a problem for about 8 months except for milk and eggs. (And I have friends that have laying chickens.) Really it’s pretty much SSDD around here.

Planted peas a couple of weeks ago and they’re starting to (bud?). I think we’ve seen our last real frost. We’ll see. Planted SWMBO’s tater starts. Put in brocolli and cabbage this year. Onions. Thinking of getting a couple more grape plants. The blueberry plants have buds on them already.

Can’t make a dump or garbage run cause they’ve closed the transfer stations for at least 2 weeks. No, I don’t know why. Being stupid. I’m thinking they’re changing a virus for the Black Plague, but, who knows. I do know that a pile of garbage at my house will pull in coyote and (maybe) bear and who know what that lives in the forest out behind us. (Two cans are full. Two standing by to fill.)

SWMBO and made a run to WinCo yesterday. I made us both wear masks and gloves. The buying frenzy of last week didn’t appear to be repeating itself. Very few people had full carts. Of course, the store was out of most “paper products.” Some of the staples were in short supply too but we got what we needed. Couldn’t find yeast though so I may have to buy some beer if we need to make bread. 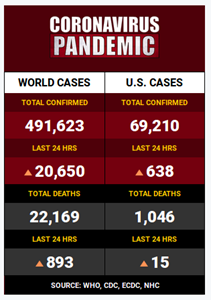 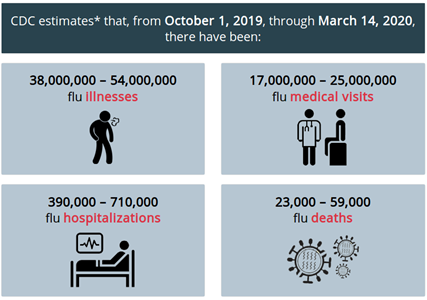 And that’s it. It’s all depressing cause the Media has foisted this panic on us and the Government fell right into line with it. Less than 1100 people have died in the U.S. from this but were in lock-down. Figure that one out.