I have my garden out back. Built cinder-block raised beds cause I really hate bending over too far for too long. (Getting OLD, you know.) I don’t grow much; lots of peas, some taters, onions and such. Occasionally some cauliflower or eggplant or broccoli. Keeps me busy and outside in the nice Wx.

BUT, been watching video’s on YouTube about hydroponics and would really like to get into those hydroponic towers and grow some stuff in my basement during the Winter. Kinda spendy to get into it though.

So, thought I’d start small and work my way up as I got more into it. Started some seedlings in the living room window and got a large plastic container to try the “Kratsky?” method of growing stuff. No pumps and all that. Just keep the bucket full to the bottom of the roots with the grow solution.

Well, once I got the “grow light” it started to get intrusive. Bright all the time and the reflected light was messing with my sleep 2 rooms away. So, I did this: 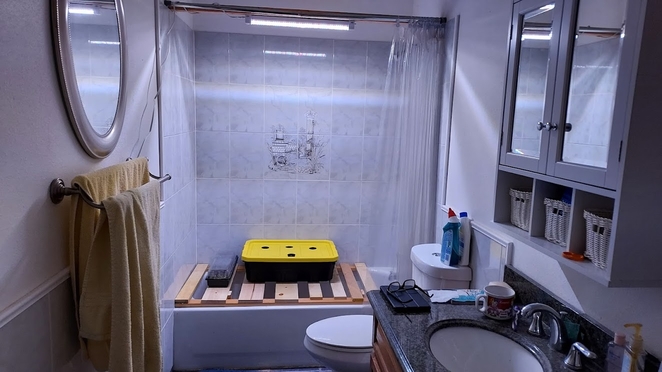 First: I must explain that our house has 2 bathrooms upstairs (where we do most of our living). “Hers” & “Mine.” Hers has our shower (which I get to use with or without her as needed) and is HERS. Mine, is also the guest potty but otherwise I’m pretty much expected to use this one for my daily absolution’s. Seems “someone” takes having her own bathroom extremely seriously.

But I haven’t used the shower in my bathroom in almost 12 years. No One has used that shower in the past 12 years. So I thought “Hmmm. WHY don’t I turn that bit into the experimental green-house area? It stays fairly warm. Its over the tub in case anything leaks. I can close the door at night to block the light. It’s handy. And I don’t have to go through the expense and effort to make the same area in the basement. (It’s Cold Down There!)

So, I did it. So far it’s working nice except that 0230 piss is bright! But I think I can get used to that. My lettuce is already sprouted and I have the nutrient stuff on order and it should be delivered by Friday. Hope the peas grow and still need to figure out where they’ll be able to climb.

Hydroponics Experiment underway. IF this works out I could, sometime in the future, turn our basement into a hydroponics farm for the Winter(s) and grow “stuff” all year.

Otherwise: SSDD around here. Snow finally started melting (sometimes in the rain) and that made our morning walk wet and slippery. Then it snowed like the dickens for an hour.

Took SWMBO to Walmart for a new iron. Stopped at El Serape for lunch/dinner. Hailed a bit. (Was almost like Lake Effect snow in Cleveland.) Got gas on the way home. (Danged pump was pumping at a blazing 1 gal every 1.5 minutes.) Twelve minutes and I had pumped only 11.5 gallons so I gave up.

Letting Gordon Ramsey teach me to be a better cook. His YouTube is way better than his tv show.

Did you know Instant Pot makes the best boiled eggs?